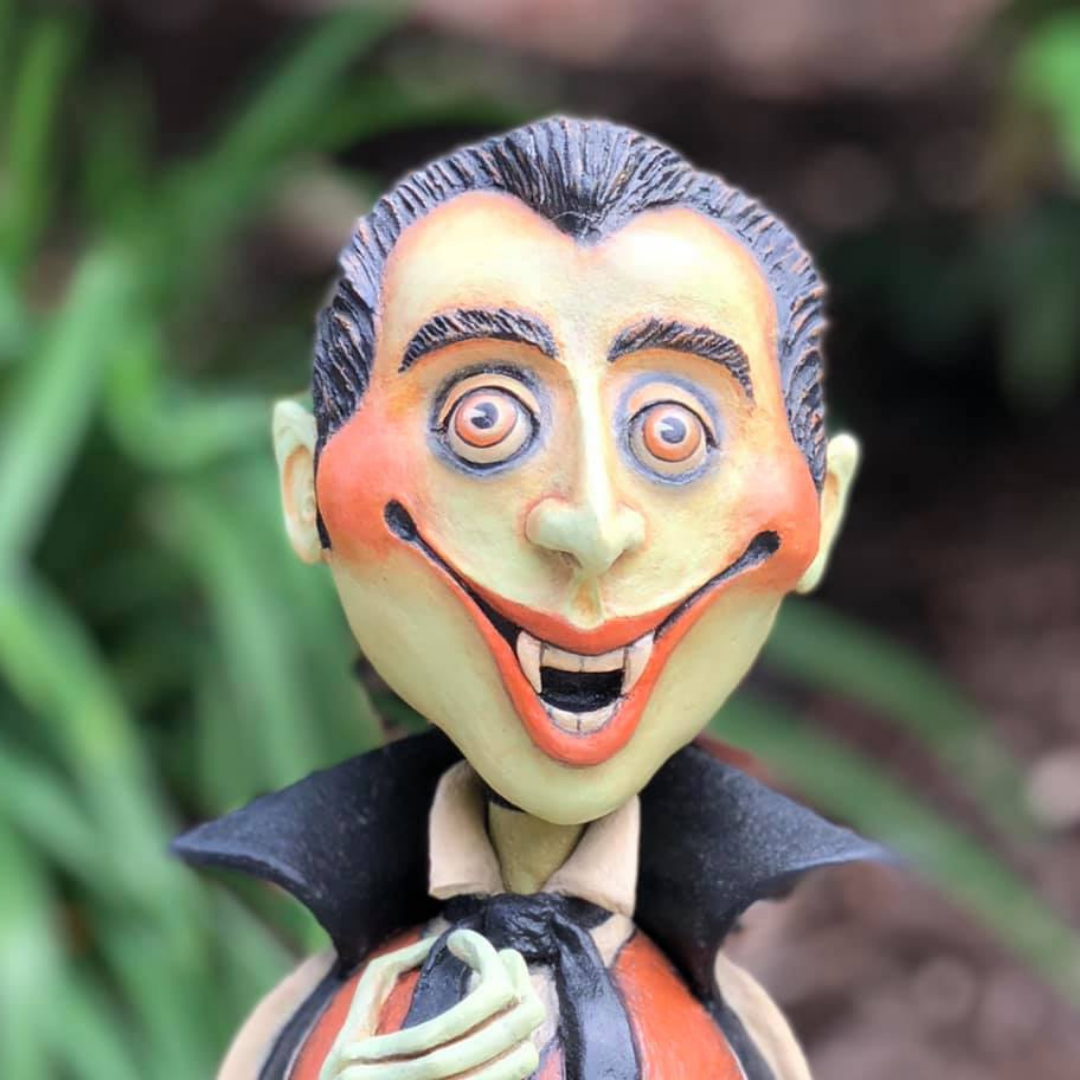 Let’s meet artist Laurie Hardin of Monkey-Cats Studio. For over 14 years, Laurie has been creating playful Halloween papier mache figures and paintings. Her work spans from traditional characters like jack o’lanterns, to non-traditional ones like...

Let’s meet artist Laurie Hardin of Monkey-Cats Studio. For over 14 years, Laurie has been creating playful Halloween papier mache figures and paintings. Her work spans from traditional characters like jack o’lanterns, to non-traditional ones like foxes. She has been featured in Art Doll Quarterly magazine and quoted in the book "Halloween Nation" (by Lesley Bannatyne). Laurie has exhibited at several national level Halloween Shows - Halloween and Vine, Ghoultide Gathering, and Bewitching Peddlers of Halloween.

Laurie was an art major at the University of Nebraska at Kearney (undergrad and grad degrees). She started college painting and drawing, but ended up finding fiber arts with a focus on weaving. After creating art and teaching for a few years, she became the curator at the Museum of Nebraska Art. As the curator, she built exhibits by focusing on materials and processes used - while many of her peers were curating from a perspective of philosophy, time, and place. During this time she encountered several artists that sparked her interest in papier mâché.

After curating, Laurie dove back into painting. She started selling at local art shows, many of them in the fall. She did fall florals which lead her to start painting Halloween figures. Her adventure in Halloween papier mâché figures was launched when she got the bug make her figures come alive in 3D. She was proud of her first figures at the time, but now laughs that "they were pretty bad." Her husband, Kelly, still puts out Petey, one of her first figures.

A cracking issue lead Laurie to start researching solutions. During the search she found Johanna Parker, a well known artist who loves Halloween. She made several artist contacts which lead to an invite to join EHAG (Eclectic Halloween Artists Guild). EHAG opened many doors for her and put her into an enthusiastic Halloween community.

Halloween and Vine in California was Laurie's first exclusively Halloween show. She and Kelly were overwhelmed with the positive response of the collectors. Laurie's Halloween sales outpaced her Christmas work. Halloween allows her to create virtually anything while Christmas is more restricted to Santas, snowmen, etc.

Laurie's lastest work has a strong cirus influence. Laurie has loved the circus ever since visiting one for the first time as a child. Mike Wolf and Frank Fritz's personal vintage circus collection at the American Pickers store amazed her.

Laurie shared some trends she is seeing in Halloween art. Johanna Parker is adding a 1940s minty green into her palette. Popular commercial palettes are being worked into both Halloween and Christmas art. She's also seeing a lot of anthropomorphic work, the mixing of human features into animals. Photographers like Victor Vague are bringing back historical photographic processes.

The name Monkey-Cats Studio is inspired by their two cats, Jake and Elwood (yes, like the Blues Brothers). Jake and Elwood were naughty kittens. They had tiny bodies and long tails. When they would walk by, all Laurie and her husband would see was their oversized tails. Laurie and Kelly started calling them the "monkey boys." The name stuck and evolved into "monkey cats." Jake and Elwood are key members of the Monkey-Cats team. They play with paint brushes, climb Laurie, and drink paint water.

Laurie doesn't have a favorite Halloween character. She loves to make pumpkin figures, skeletons (she calls them skellies), Frankensteins (and his bride), and cats. One of the most unusual characters she made was a baby monkey.

Her most treasured Halloween childhood memory was making popcorn balls with her mother. Her mom's popcorn balls were so fabulous neighborhood kids would go home, change, and come back for a second round. Laurie and Kelly still love handing out candy for trick or treat. She loves to give out handfuls of candy.

If you are interested in Laurie's work, visit her blog (http://lauriehardinsaccents.blogspot.com/) and find her on Facebook (https://www.facebook.com/MonkeyCatsStudio/).

Thank you all for joining this Monkey-Cats adventure today! Visit my web site at www.halloweenartandtravel.com for more details on the show. Support the show subscribing to the podcast and by following us on Instagram and or Facebook (linked off the website www.halloweenartandtravel.com). Join us next month to meet another surprise artist who exhibits at Bewitching Peddlers of Halloween!