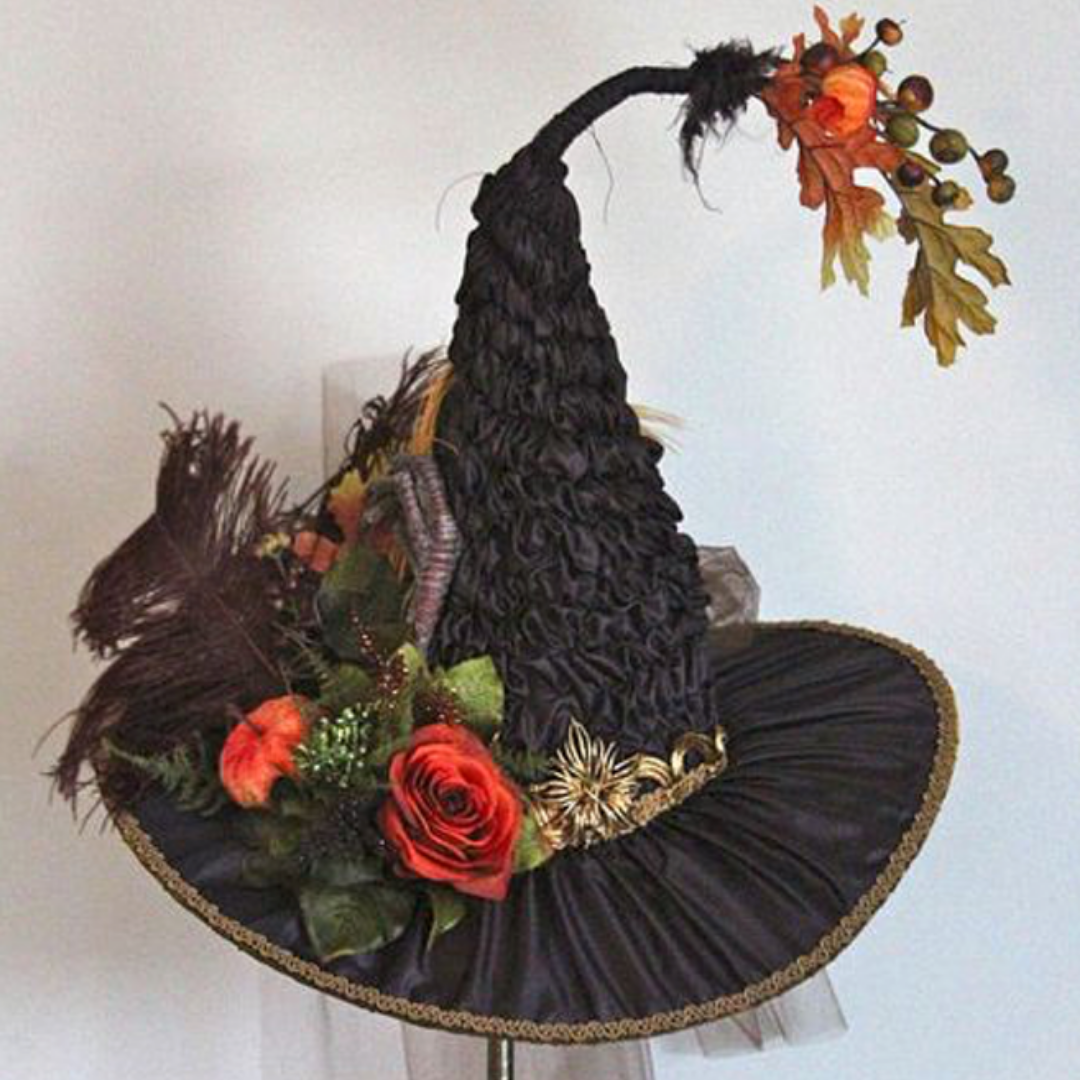 Artist Karen Steinkraus, of The Victorian Witch Hat, uses her experience in theater costume design to create one-of-a kind, jaw-dropping witch hats.  Karen started by creating big Victorian hats for theater plays like “Hello Dolly.” She discovered it was a joy to make them. A group of women wearing crazy witch hats for a girls’ night out inspired her to start creating them for use outside the theater.

Karen sews without patterns. This skill commenced in childhood when she learned to make her own Barbie clothes.  In addition to sewing, Karen creates using a variety of skills including weaving, sculpting, and painting.

She is enchanted with Victorian handiwork. She loves to stash antiques to put on her hats, using items like jet, feathers, taxidermy, and jewelry. She creates three kinds of hats: typical Halloween, pretty, and authentic hats with antiques/taxidermy. She offers full and fascinator sized hats. The signature of her hats is the ruched style and the curly stems. The ruching alone takes 4-6 hours to do.

Karen enjoys doing taxidermy mice. She makes her own body forms out of cotton and sculpts the tails. All of her mice are ethically sourced. While taxidermy is not for everyone, they are her best sellers. She lives near a forest and enjoys finding things like plants and animal bones for her hats. She recommends checking out the work of Polly Morgan and Walter Potter.

Collectors will often send her things that are precious to them to include in a hat. One of her most exciting commissions was for a college professor who wanted a witch hat to wear to commencement. She also created a beautiful starry hat for Tony Award winner, Alice Ripley. She said, “if you have it in your head, I can probably make it for you.”

Her hats have gone all over the world including a theater in Paris. It is fun for her to be in an audience and see her creations in action on the actors and actresses on stage. Many of her hats have been worn at the Salem Witches’ Halloween Ball.

Karen participates in art shows throughout her home state of Michigan, including Bewitching Peddlers of Halloween. Her goal is to start doing more shows around the United States. She loves being the Halloween artist at regular shows.